Why I Got Rich and Why All Women Should, Too

I have been a feminist all my life. In most basic terms, that means that I am 100% in agreement with the equal standing of both men and women in terms of desires, wants, goals, and achievement. A child of the 80s, this has been a basic assumption for me since, until I realized, somewhere in my mid-thirties, that maybe my assumptions were off – even when it came to how MY life and career were playing out.

It dawned on me that we are nowhere near equal in desires, wants, goals, achievement OR financially, and that really ticked me off.

So if you want to know the truth about how I became a coach, the answer is I got here through not only a calling, but FIRST because of an ever increasing desire and need for financial independence. My situation in my mid-thirties, post divorce and even with a glamorous career, was the situation that many (most?) women face when it comes to financial wellbeing: It was dire and HAD TO BE addressed.

Well before the “Great Resignation” / Covid era, I was divorced and having a very hard time finding a job again after moving back to the USA. It was a tough time: I not only suffered immensely at the hand of my own choices, but I also came face to face with a statistic that hit home. According to one report I read back then, from the U.S. Government Accountability Office, women’s household income fell by 41% following a divorce or separation after age 50. I was 34 or 35 at the time, and all I can say is: “what household income?” We were both, my ex and I, a disaster when it came to money. And the financial downfall post-divorce was harsher yet.

This is a situation too many women face in their lifetime. Due to a number of factors including systemic inequalities, gender stereotypes and roles, and cultural lies we buy into (whether we are aware of them or not) – women earn and save less money, and they are less likely to optimize how they invest to build wealth. Gender differences in financial inclusion have far-reaching effects on women’s quality of life and autonomy, their families and their communities, putting them at risk of financial fragility and poverty, especially in times of crisis. For example, women have been disproportionately affected during the COVID-19 pandemic, as we discussed on one of my favorite episodes of the Coached podcasts ever, “Why Women SHOULD Rise to the Top” – with Lindsay Costigan and Agathe Benhamou.

The moment of MY “rock bottom” came, as I mentioned, years before the present crisis. That era of dire straits was the moment it finally clicked for me. I finally got that NO ONE is coming to save me.

Just like that, beliefs such as “marrying well” and “I am bad with money” became obvious cultural lies from my past that I not only rejected, but grew to abhor. Instead, I began to remember the truths I had subsumed under a pile of designer outfits and diet books: I was smart, capable and hard working.

That is when I made a decision: I would turn my energy to closing the gap on income, investing and wealth. It was time to stop talking like a feminist and start BEING one.

So, like I said: my initial decision that changed my life was neither to become a coach, nor to marry the very wonderful Ryan (these things happened a few years later).

My first decision was to BECOME WEALTHY.

My second decision was to become a coach, so that among other things, I can teach everyone else how to rise to the pinnacle of their potential and live a life they love, too. As part of this, I believe it is my MISSION to help women rise by engaging, educating and encouraging more women to take control of their finances, as well as by talking about money and imparting all the mindset changes I have learned that changed my life.

THE THING IS, we still have our work cut out for us. Financial inequality reigns supreme, and starts at a young age – several studies show boys are far more socialized to think about money and think themselves capable with it. For adults, according to the Global Gender Gap Report 2021, even in Iceland – the country with the smallest gender pay gap – women still earn only 86 cents to a man’s dollar for a similar role. Women’s lower income, maternity/ motherhood, paired with this present moment’s lower labor market participation and other systemic biases have a compounding effect on women’s ability to build wealth. And so, in the US, while women on average earn 82 cents to a man’s dollar (creeping up on Iceland), they only own 32 cents, which drops to mere pennies when comparing black women to both white men and white women.

I’m sorry, but are you not OUTRAGED reading this?

30+ years ago, we all watched the one and only Joan Collins portray Alexis Carrington Colby Dexter on Dynasty – a woman with power and a male secretary.

Well… I guess it doesn’t really matter what happened – it’s done. Instead, let’s talk about shifting this, and if I have been able to turn this ship around in my lifetime, so can you.

Here are 3 keys to getting rich and doing it right:

(Gentlemen, feel free to enjoy them, too – I don’t mind anyone getting richer. What I do mind is anyone still standing in their own way).

Women universally lag behind men in financial literacy, which impacts their ability to make sound financial decisions, participate in the stock market, plan for retirement and build wealth. You know how you close that? By talking and reading about money.

Some of the books that changed my life:

You are a Badass at Making Money, by Jen Sincero

We Should All Be Millionaires, by Rachel Rodgers, And

The Science of Getting Rich, by Wallace Wattles

Read ’em, and tell all your girlfriends.

2. GET STRONG ROLE MODELS of women who are rich and cool

Another thing I did to close my money knowledge gap? I started to hang out with women who were great with money and liked money (this means: they are not terrified of losing it all the time, which makes people greedy and insular). These people were and still are generous and frisky – epic qualities in a money mentor, if you ask me. And of course, we have financial role models in Hollywood, too. Anyone check out J Lo lately? She has got it down! I love it!

The greatest role model? Cher. Check out this 45 second video: 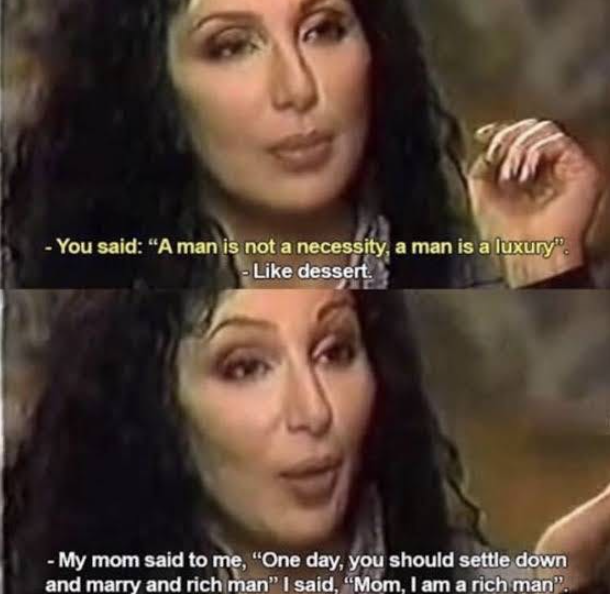 (that may be my absolute favorite video of all time)

Surrounding yourself with female financial role models normalizes talking about money, investing, asking for equal pay and building wealth. It raises your frequency and your game. So go on, lean into those of us who are ready to talk about getting rich. Join female investing platforms and entrepreneurship hubs, like Ellevest, Potential to Powerhouse and the Female Founder Collective.

Chances are, they won’t just inspire you – they will help you get rich, too.

3. TAKE EVERY WOMAN YOU CAN UP WITH YOU

It is my firm belief that not only must we rise to riches and thus to equality, but that we must interact with, listen to, consider and support women who are disproportionately impacted by financial inequalities. If the experience of women from all parts of society is not benefitted by financial feminist efforts, then it has failed. It means only a few of us keep breaking through, while the vast majority *(over 95%, actually) never launch a 7 figure business and stay on a diet hoping to get “chosen” by a rich man over and over and over. Ew.

I also hope that those of us who break through take everyone else with us: from giving opportunities to women, to hiring women, to empowering them through our own offerings and books – like Eva Yazhari, who wrote The Good Your Money Can Do, to Hitha Palepu, who wrote We’re Speaking. Spread the empowerment, amigas! A feminist tide lifts all boats!

The bottom line is this:

Financial feminism is about getting rich TO get equal. It presents an opportunity not only to reduce the gender pay, investing and wealth gaps, but also to use women’s increasing financial power to align with the goals and actions required to build a sustainable future for all.

If YOU are ready to call it a day with inequality and pivot towards the fullness of your purpose and potential, I hope you enjoyed this email.

And, if you want more, I invite you to join part 2 of my series for BRIGHT: Pivot to Purpose, tomorrow. Get your ticket here: brightlive.app.link/CoachKeren2​ 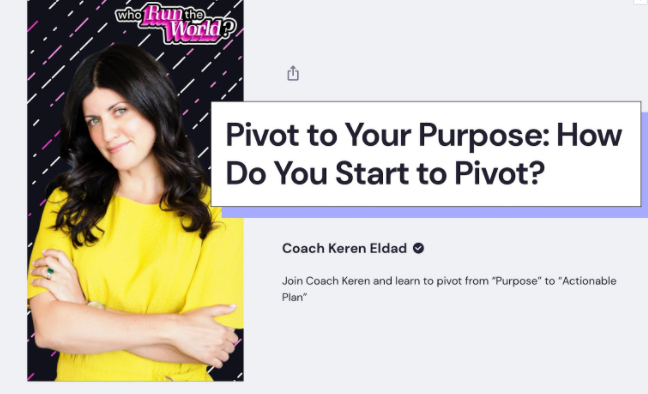 Happy International Women’s Day. May we soon not need one.